In April 1866, Cornhill Magazine published “The Modern Doctrine of Culture” as a call to observe the principals behind culture resulting from the expansion of the realms of science, politics, and art.  The essay laid out the position that culture was making itself increasingly known in Victorian England and that one should seek to define culture not just through mere scientific observation of it, but also through the capability to practice it with “artistic sensibility” (Unsigned 435).   Nearly a year latter, one of the Victorian era’s prominent poets, Matthew Arnold, published “Culture and Its Enemies” which heeds the call to make culture doctrine by criticism of social and political aspects of Victorian life. “The Modern Doctrine of Culture” and “Culture and Its Enemies” emphasize the importance of culture as a unifying force for a population that struggled against denominational exclusiveness in the political and religious realms. For a society to progress, both authors argue, a doctrine of benevolent understanding and guided action are required. 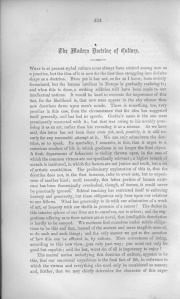 “The Modern Doctrine of Culture” begins with a nod to the future, stating that the intellectuals of Europe are beginning to realize the importance of formulating culture as doctrine. This doctrine, once complete, will provide “a striking addition” to the “intellectual notions” of the European. The essay makes an attempt at the causation of the importance of such a doctrine by comparing its rise to the birth of a new star in the night sky, claiming, “that new stars appear in the sky oftener than new doctrines dawn upon men’s minds.” At the present time of the essay’s publication, the concept of culture as a form of unifying identity had END_OF_DOCUMENT_TOKEN_TO_BE_REPLACED